EW7: Powerpoint does not work through NDI after black screen

started a topic over 1 year ago

Today in the service i found a bug/error which I could reproduce:

As a solution i quick selected a song and after that selected teh powerpoint again and after that it worked just fine: Changing a slide in the powerpoint resulted in Live View and NDI change.
In summary: When the screen is black (Ctrl-B) and I select a Powerpoint --> Turn off black screen --> selecting next slides works in Live View in EW but fails over NDI: The first slide stays on in NDI.
14 CommentsSorted by Oldest First

Can anyone give some feedback on the error i found?

said 10 months ago
I am having the same issue. Power point through the alternate display as an ndi output only show a black screen.

What build number of EW are you running? This should be fixed in the newest build. 7.3.0.13

Hi Dan, I am running the latest version 7.3.0.13. Here is the funning thing. I'm running a trial version of the same build on my home PC and it works fine. I do have a newer video card for the church PC, to assist with stream encoding not to try and resolve this issue. If that does help I'll reply here that it did. For reference, the current video card in the church PC is a AMD HD 5700 and will be moving to a GTX 950.

ok, yeah, let us know if the video card fixes the issue.

Changing out the graphics card did not help. It will display presentations built in EasyWorship but not powerpoint presentations. I only shows a black screen

said 10 months ago
So here's the full breakdown. I am running the latest version of obs. Along with version 5 of ndi along with the latest version of the obs-ndi plugin. I have now a GTX 950 graphics card running the latest NVIDIA drivers. When I initially put the card in it displayed the PowerPoint in one test. From then on it no longer does so. It will display every other output ie: songs, scriptures, even YouTube videos using the registry key workaround. Previously to the graphics card upgrade it wouldn't play YouTube videos even with the workaround. So that's an improvement. For transparency sake, here's the way I have the ndi software and the OBS ndi plug-in installed. If you install the obs-ndi plugin it gives you the option of installing version 4 of the ndi software which I declined so sad it would use the version 5 of ndi to ensure that there was no conflict how to plug in trying to use the old version. We have 3 physical monitor outputs running at 1080p. One control monitor 1, 1 projector Sanctuary monitor and a single TV on the back wall that is now the fold back monitor.

Try following the steps in the article from the link below to set the video card use for EW and PPT and see if that does anything.

Already saw that document. It only applies to computers with switchable graphics. This computer does not.

I saw that document already and it only applies to computers with switchable graphics. This one does not.

but in my home computer, using gpu gtx950, work fine

so my solution is install ndi application, and turn on ndi screen capture in easyworship computer

and the obs computer capture 2nd monitor / live screen of the easyworship computer.

This is not a bug. Your video card the GT 730 is not powerful enough.  To use the NDI you need to really have a video card that is in the recommend not the minimum. 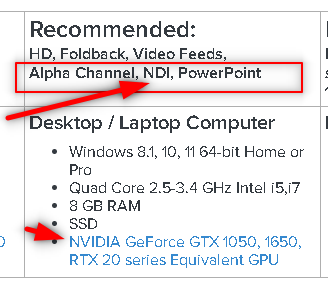 and for powerpoint work fine if using ndi screen capture.

tested and already running regullary in my church.