started a topic over 5 years ago

Our church has two different primary languages: English and Swahili. We're looking for a way to show both languages simultaneously, especially with Scripture. Is there a way to do this already, or is there a developing feature for this?

said about 5 years ago

There is not currently a way to do this but it is a feature we are interested in pursuing.

I would very much like to see this feature as well.

said about 5 years ago
Any updates on this? I would also like to see this feature added, my church is in the same predicament (with the exception of languages, we use Russian/English). This is a deal breaker for the main media director, who will not use the software in the main sanctuary. As of now we are using a software developed by a neighboring church called EZ Projector, it is not pretty or easy to use and has its flaws but the reason we use it is for the dual languages. It would be very nice if EasyWorship incorporated this feature into its new update.
Y

I would very much like to see this feature as well

said about 4 years ago

Hi, has this issue been resolved? We would like to purchase the software but it has to suit our Zulu/English needs.

said about 4 years ago

This issue hasn't been resolved.

I would also like to see this feature, also to be able to have two languages for songs, where the alternating lines are formated differently.

I would also like to see this feature implemented.  We give bilingual services and this would make things so much easier.  Or maybe offer a bilingual bible to download to display.

said over 3 years ago

said about 3 years ago

For the two language songs, it has been achieved...i'm using it in my church. here in Nigeria.

I'm seeking on how to achieve two languages for scriptures display.

said about 3 years ago

We are a bilingual church looking for a solution. We have our songs placed, but would like to have bilingual scriptures and even better: the ability to output one language to one screen and the other language to a different display.

said over 2 years ago

Looking for ways to show Russian Songs instead of American English psalms? Let me know know how this can be done.

said over 1 year ago
This function would help us in the songs. For other languages then Dutch, we include the Dutch translation with a different layout below. This now takes a lot of time because you have to adjust the layout per line for the translation. An additional input for text means that we can already set its alternative formatting in the theme, and not have to change it every time. (If you use an alternative output, you can immediately add an alternative layout in that theme, this would be nice too.)
V

Is it possible that there will be an extra input field, just like with the presentation, where we have the song translation. We can then add a format to this input field for both themes so that it also appears in the alternative output. 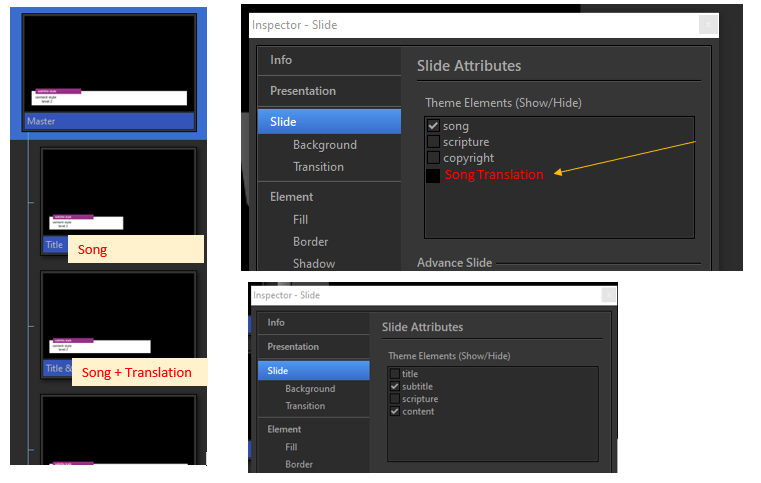 I've searched and couldn't find anything... Is there an option for Parallel Bible in Russian and English? Thank you and God Bless!!!

Login to post a comment
Topic merged into this topic:
More topics in Feature Requests
See all 462 topics