started a topic over 2 years ago
Over the last few months we have had issues with EW freezing and needing to be reset. It usually happens soon after startup, normally during the pre-service practice but has happened occasionally during services. Some of them have been powerpoint related. We are using PP2010. I just read a post about only using .ppt files and not .pptx. I think it was in reference to EW6. Is this valid for EW7?

Last Sunday night the program crashed so badly that when it was restarted it thought it was no longer licensed and gave the following error.

But a full restart of the machine cured that.

I have loaded a copy of 7.1 for the morning so we will see how things go. Another time it crashed after loading 1 song from the list into the schedule.

We are currently using an i7 with 8gb ram, win10 and a nvidia GT610 card? Things have worked flawlessly up until recently but should I look at a better video card?

said over 2 years ago
Using .PPT files instead of .PPTX is applicable to ALL versions of Easy Worship from earliest to latest. .PPTX files (like all of the x files from Ofice 2007 on) are essentially the .PPT file placed in a compressed archive file that needs to be decompressed when you access it requiring more CPU power than a standard .PPT file.

And yes your GT610 is rather under powered for EW6 or 7, but PowerPoint is much more dependent on the CPU than the graphics. I do .PPT files in EW7 on a C2D laptop with onboard Intel graphics with minimal lag in our children's church area, although I am going to be replacing it in the next couple of months. Videos definitely considerably more graphics power though so an upgrade to at least something from the system requirements page would be beneficial overall. [url]

Also make sure that you have all of the fonts embedded in the PPT (or PPTX) files and that "Loop Continuously Until ESC" is selected when creating the PowerPoint even if it's only a single slide. 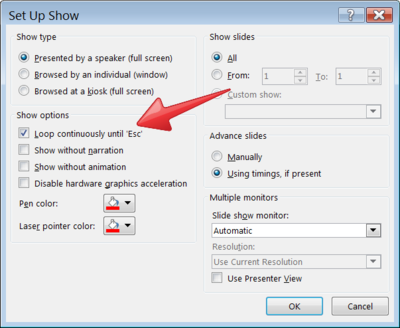 One other thing I've noticed with Windows 10. When you first start it up it does a lot in the background and if you have a spinning rust drive it can take half an hour or more for it to finish, assuming there were no updates to install (SSDs take considerably less time to complete). EW tends to run like crap during that time. Run Task Manager when you run EW and watch how much CPU usage EW is using and anything else. Also use TechPowerUp's GPU-Z to see how much GPU memory and resources are being used. That will give you some idea of how your GT610 is handling EW. [url]https://www.techpowerup.com/gpuz/

said over 2 years ago
To your question about the video card. It's hard to tell if it caused the problem, but it is well below spec for what I would recommend for use with EasyWorship.
F

said over 2 years ago
Installed a 1050 video card the other day, so that side shouldn't be a problem now.
Comments to this discussion are now closed!
More topics in v7 Archive
See all 393 topics